Whenever I watch Salome on DVD I always end up looking away during the climactic moments. Not because I don’t want to see what is happening, but because I do want to hear, in detail, what is happening, and this is easier to do if you’re staring off into space rather than trying to also process visual information. Or at least it’s easier for me. 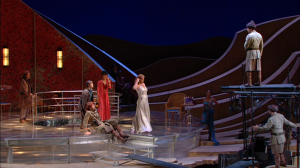 Our library has acquired a lot of Met DVDs over the years, probably on the principle that if it’s good enough for New York, it’s certainly good enough for us. This is not insane as a strategy – one might complain justifiably now and then about some things, but on average the Met does not produce garbage, and besides, when I see the opening bit where they give you a shot of the hall and you see those ice-crystal/snowflake/whatever the hell they are-shaped chandeliers being ratcheted up out of the way in preparation for the performance I get either nostalgic for my last visit or anticipatory of my next one, which is a nice feeling – but it means that one does sometimes wish that the person doing the DVD buying would suddenly, say, get wickedly obsessed with the Opernhaus Zurich for a few years. Or maybe Salzburg. Or the Netherlands state opera. Just for a change.

But this DVD of Salome from 2008 does not undermine the case for such a purchasing strategy. The characters are in modern dress – Salome and Herodias in evening gowns for Herod’s party, Herod in a glitzy white suit, the soldiers in modern military uniforms with turbans – but there are enough unexpected touches to communicate that this is not simply a modern day setting of the opera. Herod’s executioner wears little more than arm-bands and dreadlocks, and the First and Second Nazarenes who turn up near the end are attired in crisp pastel summer suits that would not have been out of place at a fancy church picnic in 1935.

The set itself is a series of interlocking curves and circles. The high wall on the left, tiled in red, contains Herod’s palace/courtyard. In the center of this is a circular area with a clear plastic floor and in the center a stairway leading down; it is from here that Salome, Herod, Herodias and their guests appear. But this bright, glossy area is only half contained by the red-tiled wall. It’s incomplete. On the other side is a series of ridges that look like abstracted hills or sand dunes; on the furthest of these, standing motionless, are a group of winged figures visible only as silhouettes. Also in this area is a kind of bluish-black fracture in the ground, surmounted with dirty scaffolding – it looks like it’s been smeared with pitch. It is in this pit that Herod has lodged Jochanaan. He’s winched up by a little pulley/dumbwaiter apparatus that later is used to pass up his severed head. The effect of the whole thing is to visually contrast Herod’s power and Jochanaan’s – Herod’s is brighter and dominates visually, but if you look at the set as a whole, he’s surrounded by that larger, desolate space.