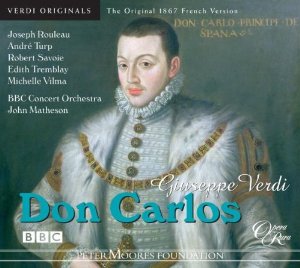 This Opera Rara recording of Verdi’s Don Carlos is a mixed bag. I got it because I wanted an audio-only recording of the complete 1867 French version. As far as those two things are concerned, this recording’s credentials are impeccable. It is undeniably complete, clocking in at close to four hours. It is also unarguably in French. According to the booklet the principals are all Francophone, which is great, although the more subtle benefits of this are probably lost on me. But aside from its length and being in French, I am not sure that this performance is one to seek out on its own.

It was recorded by the BBC in 1972. The orchestra is the BBC Concert Orchestra, conducted by John Matheson. It’s a live performance (you can hear the occasional stage noise and there is audience applause at the end of each act) but it was performed specifically in order to record it – the original 1867 version of the score had just been discovered and restored – and the audience was, according to the booklet, “invited.”

The recorded sound is so-so. It often sounded murky and indistinct to me, particularly some of the big numbers where the soloists, full chorus and orchestra are all going at it at once. It also puts the singers really far forward, sometimes distractingly so, and the result is that often they overwhelm the orchestral detail – this happens for example during the Carlos/Posa/Eboli trio in Act III. Something similar is at work with the “a monk” / monk chorus / orchestra bit early in Act II. You can hear the solo monk (sometimes aka Charles V) but the layers of the chorus and the orchestra parts which need to be clear in order to give the thing its proper punch seem muffled. This may be just a microphone placement issue, but even so, it’s irritating. In addition to this, the soloists often sound like they’re singing in a shower stall; the sound is weirdly resonant and echoey. This seems to affect André Turp (Carlos) more than anyone else, but it’s not something that any singer could possibly do on purpose, so I’m going to chalk it up to some magic sort of synergy between tenors and 1970s BBC microphones.

It’s hard to tell where the problems with the recorded sound leave off and the interpretation begins. In the orchestral introduction to Act I, for example, I am not sure whether the orchestra is trying to sound bigger and more dramatic than it is, or whether it is actually bigger and more dramatic than it sounds. Certainly it doesn’t quite have that warmth and aching sadness (somewhere between a deep sense of loss and a sense of grandeur) that I tend to want in this opera. Along similar lines, in terms of grandeur and weight the monks’ chorus at the beginning of Act II doesn’t quite match up to the orchestral introduction just before, with that big dramatic French horn part; it’s not clear to me whether this is an artifact of the recording or if the men’s chorus was in fact a little underpowered.

There are several moments in the performance in which the vocal line and the pieces of the orchestra parts seem blurred, as if the various components haven’t quite snapped together right. I noticed this particularly in Elizabeth’s “Ô ma chère compagne” in Act II, for example, which is one of Verdi’s most wonderfully eerie and weird and beautiful pieces of music, what with that da-DUM (ping!) da-DUM (ping!) bit in the orchestra with the soprano line floating above and around it, but which here doesn’t quite get its due.

But the story is not all one of doom and gloom.