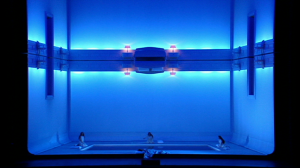 Robert Carsen’s production contains a lot of doubling. The first thing we see is a room lit in blue. Or rather two rooms, or a room and its mirror image. It is a spacious but anonymous looking bedroom, with a bed, two lit lamps and two chairs next to the doors on either end. The room is reflected as if instead of a floor, there was a mirror – or as if there was water there. The action in the first act takes place in the ‘inverted’ room below. What would be the moldings linking the walls to the ceiling here curve into the floor; it looks like we are at the bottom of a swimming pool. In the center there is a square opening filled with water.

When Ježibaba turns Rusalka into a human, the bottom half of this set vanishes into darkness and the top descends, creating just a bedroom; the ceiling has a square aperture, doubling the square pool, open to we know not what. This pattern of doubling continues. In Act II, in which Rusalka tries to woo the prince but is ultimately rejected in favor of the more warmly amorous Foreign Princess, the bed is doubled again, but this time the axis is vertical, with the “mirror” in the center of the stage. (This is represented in the picture above, with Rusalka in the center.)

People are doubled as well. Or even more than doubled. Rusalka and the Foreign Princess wear the same dress (and have the same hair). As Act II progresses, Rusalka and the Foreign Princess undergo a series of costume alterations that result in their being both dressed like Ježibaba.  In Act III, Rusalka and Ježibaba are still dressed the same – and Ježibaba offers Rusalka the suggestion to kill the prince from a big bed suspended up in the air, the same bed that we have seen over and over all along, and on which Rusalka and the Prince have their final kiss at the end, although by this time the room and the bed are both back to being more conventionally oriented.

The effect of all these reflections and repetitions is to suggest that Rusalka’s world is a kind of necessary extension of the human one. Or rather the reflections are a solution to the problem of how to render the concept of a fairy tale. Reflections are not ‘real’ but neither are they made up or invented – they are just there, inevitable but inaccessible.

And then there is the theme of sleep. When we first see the three nymphs in Act I, they are curled up at the edge of the square pool with pillows and blankets, asleep, as is Rusalka – the ‘veil’ that Rusalka gives Ježibaba to seal the deal is the same blanket she was sleeping under. We see a bed over and over again – it’s worth noting that at the beginning of Act I, it’s the reflected/inverted bed on the wall that is the strongest visual signal of the room being doubled. Beds are for sex, and there is some kissing and touching that happens on them, but they are also, even primarily, for sleeping. In Act II, Rusalka herself falls asleep (backwards, with her head near the foot of the bed) on one of the reflected beds, and she remains asleep during the ballet, which involves a big crowd of men in suits like the prince (or like Rusalka’s father the Water Spirit) and women in dresses like Rusalka’s and the Foreign Princess’s – who is being doubled or multiplied there is an open question. She is still sleeping in the scene that follows, in which her father comes to find her.

The world of fairy tales is also the world of dreams, or the other way around – there is some slippage between Rusalka’s world being invented unconsciously like a dream and it being already there, like a reflection – which is probably part of the point. At the end of the opera, when the Prince and Rusalka are settling down to a little more than a kiss on the bed, the dark that closes over them is a blue-black projection of rippling water that has appeared several times already; it was the background, for example, for Rusalka’s extended “darn it, I’m a death spirit” bit earlier in Act III. The Prince and Rusalka itself have disappeared permanently beneath the surface, but what the surface is, whether it’s death or sleep or something else, is ambiguous.