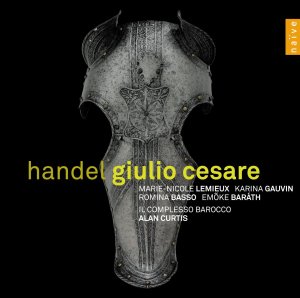 Giulio Cesare can turn out quite the taco party by operatic standards, especially if you cast an alto as Nireno, as this recording does. I wonder if anyone has ever gone the whole way and had a female Tolomeo too? Might be interesting. Out of eight vocal roles, only two, Achilla and Curio, pretty much have to be sung by men. Though the convention of the countertenor Tolomeo really is fine by me – nothing wrong with a little variety in timbre, and there are certainly plenty of good countertenors out there in the world.

I was not sure what to expect from this recording. Alan Curtis’s other versions of Handel operas have occasionally struck me as weirdly dry. There are one or two odd moments in this one too. I expected the overture to sound crisper and cleaner, somehow – it came across as oddly muffled or fuzzy sounding. This may have something to do with sound balance, though. The first time you hear Caesar (Marie-Nicole Lemieux) on this, it’s like she’s RIGHT THERE IN YOUR FACE. Must be some combination of microphone placement and whatever it is that recording engineers do to recordings. But whatever it was, I ceased noticing it by the time we got to Cleopatra’s aria “tutto può donna vezzosa” in the last third or so of Act I.

Other odd moments were more unambiguously Curtis-related. Tolomeo’s “l’empio, sleale, indegno” was definitely, unambiguously in some variety of triple time – you would never miss the beat in this version. In Sesto and Cornelia’s “son nato/a a sospirar/lagrimar” duet at the end of Act I there is a weirdly strong pulse in the orchestral introduction, the part that corresponds to the repeated “ah!” later on in the vocal parts. (It happens whenever the orchestra has that phrase, which is several times.) It’s like the orchestra is groaning. I can see the thinking behind this idea, but I’m not sure we need it. And the horn player who gets the little hunting horn call in Cesare’s “va tacito” seemed extremely relaxed. Orchestrally, that was a very mellow sort of a hunt.

But these are relatively nitpicky points. The plusses far outweigh the minuses. During Cesare’s furious “empio dirò tu sei” when Tolomeo has just sent him the severed head of Pompey the violins are harsh and dry and angry and the entire ensemble (probably a better word than orchestra – it’s a small group, only eight violins, two violas, two cellos and the woodwinds) lays into the final bars with an intensity that’s perfectly consistent with Cesare’s outrage. The same was true during Sesto’s similarly angry “l’aure che spira” later on. They also get the rolling rhythm/tempo of “l’angue offeso mai riposa” just right. And as far as emphatic emphases go, there are a few of these in Cesare’s “quel torrente” (submission: there is no proper opera seria that doesn’t have something in it somewhere about a torrent, or a shipwreck, or a boat of some kind – the genre is on some level fundamentally aquatic) but here they work. Finally, whoever the violin soloist was in “se in fiorito ameno prato” (loose translation from the Italian: “I am going to get laid soon”) put in some appropriately birdlike violin playing.