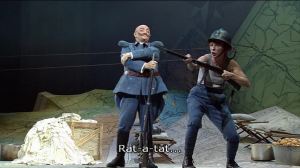 Donizetti’s opera about a little girl raised by a regiment (alternate title: Eight Hundred Men and a Baby) who discovers that she is the natural daughter of a noblewoman and ultimately marries the young Tyrolean lad that she had fallen in love with in Act I is not necessarily what you would call deep, but it’s entertaining enough.  Having Natalie Dessay in the title role doesn’t hurt either. I know she has recently said she is giving up opera, but I am not sure that I really believe this. I hope it’s not so. At the same time, watching her antics in this production led me to think about things French and antics in a general sort of way, and I had to wonder what would be like if you put in Patricia Petibon as Marie? I bet that would be entertaining too.

This production places the story in what appears to be the early twentieth century – there are mentions of Bentleys and electrodes and machine guns, and at one point near the end, Tonio (Juan Diego Florez) comes rolling in seated on a tank. The look is realism that avoids being too literal. Marie irons piles and piles of regimental laundry and peels potatoes, but the strings of drying long-johns at the back are almost added characters at some points. There are cots and buckets and rifles, but the floor of the stage is an enormous map, with folds making hills and valleys. The Marquise de Berkenfield’s house is house-like, but the servants are creepy automatons, whose jerky, clockwork-like movements Marie is made to take on as she becomes “civilized.”

The star attractions here are probably Dessay (Marie) and Florez (Tonio). Dessay can do perky and cute with the best of them, but the performance involves more than that. Marie’s moments of sadness and despair in Act II are rendered with a depth that makes the character seem far more grown-up than the fifteen-year-old she is. Florez – well, Florez can handle those high notes very impressively. He’s really in his element with these sort of “earnest young man in love” type roles. There is also some very pretty woodwind playing during Marie’s last Act I aria where she has to bid the army life goodbye.

Felicity Palmer offers a certain amount of comic relief as the Marquise; the scene where she and Marie are practicing music (with interjections from Marie’s army dad Sulpice) is pretty entertaining. We are also treated to an appearance by Dawn French as the Duchess of Crackentorp, though the content of the humor – the duchess breaks into English at numerous points, e.g. informing the grumpy and insulted Hortensius that she can hear him calling her an old bat – is not particularly brilliant.

Like I said, it’s probably not an opera to change your life, but it’s cute.