Have you ever wondered what it would be like if Mel Gibson directed Don Carlos? I raise the question because in this version, directed for the Theatre du Chatelet by Luc Bondy, there is a moment in Posa’s death scene where I’m pretty sure I heard drops of the fake blood, of which there is plenty, land on the floor. But I am going to assume that this was just an accident of microphone placement. (To answer my initial question: I suspect that the auto-da-fe scene would somehow become much longer than it normally is and they would kill Posa with a spiked mace rather than a gun. This would also take much longer than is customary.)

END_OF_DOCUMENT_TOKEN_TO_BE_REPLACED

I saw the live performance of this (twice!) and I was not sure what my reaction to the DVD would be.

It’s a different experience seeing it from close up – and hearing the commentary. Elizabeth’s odd rolling gait was the director’s idea (the singer, Elza van den Heever, had initially gone for ‘royal’ but McVicar had other ideas), and according to Deborah Voigt, who does the interviews/introductions, the second act is supposed to take place ten years after the first. This was news to me. I don’t think there’s a ten year gap at any point during Schiller’s play – at least, I don’t remember one – and I had no idea there was supposed to be one in the opera. I don’t think it’s necessary; the drama, such as it is, works without it, and as far as structures for stories are concerned I’d rather have one seamless arc than two chunks with a hole in the middle. (Mary was involved in a series of plots in the 1580s before her execution in 1587 – maybe the idea is that those happened in the interim, making her innocence less obvious and changing the game a little post-confrontation scene? Maybe if I paid more attention to the libretto this would be obvious. Then again, Mary had been accused of all kinds of sketchy things even before the late 1570s (i.e. the end minus ten years) so I’m not sure that works either. This is probably one of those questions that is not worth pursuing.) But it does make some visual details of the second half easier to explain – the fact that Leicester’s hair and Cecil’s beard are grayer.

There was one thing that I suspected I would find slightly irritating close up on DVD: Mary’s constant trembling in the second half. I was right, although it wasn’t as distracting as I thought it might be. And besides, when DiDonato sings the way she does here, she can basically do whatever else she and the director want as far as visuals and I do not mind at all.

The take home lesson of this DVD is that even though Donizetti’s Maria Stuarda is based on Schiller’s play Mary Stuart, the two works of art do not actually have all that much in common. Indeed, they are quite different. I am not sure that performing them GLEICHZEITIG is strictly necessary to get this point across, but I tell you one thing, it is an experience that one does not soon forget. In fact, my impulse is to state from the start that many a production of the Donizetti opera might well be improved by having the two queens meet in the park, insult one another in Italian and then start screaming at one another . . . in German. It gives it that added “am I high?” kind of ping! that your more conventional productions of bel canto operas often lack. 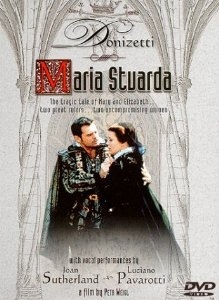