I have been to not one but two live performances of Strauss’s Elektra in the past six months or so. Each time, I come out of it feeling stunned and unable to articulate any particular opinion about the performance. But stunned is good. And sometimes the opinions trickle in later on. (I think part of it might be Hugo von Hofmannsthal’s fault – I find that operas for which he has written the libretto take me a while to absorb, because I keep getting distracted by the quality of the text and occasionally miss music that I have to catch the next time around.)

When I glanced at the program last night, I was startled – the casting for this was pretty much incredible: Nina Stemme (Elektra), Adrienne Pieczonka (Chrysothemis), Waltraud Meier (Klytämnestra) and Eric Owens (Orestes). I bought the ticket to hear Stemme, who I’d never heard live before, but this is one of quadruple-bonus type evenings that you sometimes get in large cities with big opera houses.

END_OF_DOCUMENT_TOKEN_TO_BE_REPLACED

This was the best concert I have been to in months – exciting, beautifully rendered, balls-to-the-wall Lieder singing from the very first song. I had never heard Mattila live before, and I now wish I had more opportunities to do so – her voice is stunning. It’s bigger than I expected from recordings; part of me wished I had been able to sit closer to as to see more of her acting up close (I was in the back row of the balcony) but I think that aurally back center of the hall was perfect.

And it was so nice to go to a concert that does not consist of songs I have heard a thousand times before! Familiar material, but not too much so. The first set was Brahms’s Ziguenerlieder (Gypsy Songs). Mattila threw herself into these both vocally and physically; I realized when I opened my eyes somewhere around ‘Wißt ihr, wann mein Kindchen” that by not watching I was missing out.

I have heard Wagner’s Wesendonck Lieder a few times before, but I never listened to them with the same attention as I did last night. Among the high points here was the final song, “Träume,” (“Dreams”) which was spellbinding, from the moment the vocal line steps quietly out of the piano part until it sinks away again at the final lines of the text. Afterwards, I kept trying to put into words the feeling of when a song performance really clicks. I have a sense of being able to follow what is being expressed, even if it is in a language I don’t know, or don’t know well enough to understand every word; I also get an impression of the song, or at least the vocal line, holding itself together – there’s a feeling of wholeness. Whatever it was, and however you want to describe it, there was plenty of it in this concert.

After intermission, Mattila sang Berg’s Four Songs, Op. 2. The more I hear live performances of Berg’s songs, the more I like them. Here, with the first one, “Dem Schmerz sein Recht,” every note seemed to fall perfectly into place (I have in my notes “this just gets better and better”); the entire set was over far too quickly, and when we’d moved on to Strauss I wished for a moment that we could stay in Berg world for a while more.

Mattila’s stage presence is lively, funny and extremely energetic, and she certainly knows how to butter up her audience. She introduced her encore, a jazz (I think?) song called “Eine kleine Sehnsucht” with the observation that she had learned a new English word recently, “yearning,” and that this song perfectly expressed her yearning to come to New York again – “but in German, of course.” She delivered the song with the sort of style and sparkle that in retrospect I think Renée Fleming was going for in her similarly jazzy encore the other night, but didn’t (by comparison) quite nail. Mattila nailed it.

I stepped out of my usual rut last night, in the sense that instead of German art songs, I went to a recital of (mostly) Russian art songs by baritone Dmitri Hvorostovsky. I am pleased to report that I can now reliably repeat his last name, because I took care to look at the program so as not to be caught out on such an elementary item – earlier, even having heard him once at the Met before, I would have been able to say it started with H, ended with -sky and that there was Russian in the middle, but that would have been about the limit. So. Hvorostovsky.

END_OF_DOCUMENT_TOKEN_TO_BE_REPLACED

I very nearly missed seeing this. It was broadcast on the same day as Röschmann’s Wigmore Hall recital, and that pushed it out of first place on the operatic priority list, and then despite knowing that Glyndebourne had put the video up for a week, I managed to forget about it for about six and a half days. But fortunately I remembered late on Saturday night. Anyway.

END_OF_DOCUMENT_TOKEN_TO_BE_REPLACED 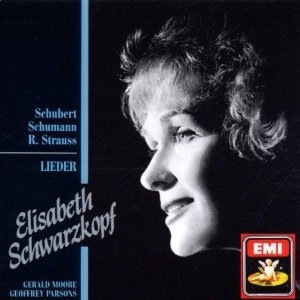 My modus operandi with music – and a lot of other things, I guess – is to hear something, get obsessed with it and listen to it over and over again until everyone I talk to is heartily sick of hearing about it. The thing I have been obsessed with the last week or two is this recording, or rather compilation of parts of other recordings, of Elisabeth Schwarzkopf singing Schubert, Schumann and Strauss songs.

END_OF_DOCUMENT_TOKEN_TO_BE_REPLACED

Some kind soul alerted me to the existence of these on YouTube, for all those who missed Röschmann singing Strauss on the radio on Monday night. If it has never occurred to you to wish that Antonio Pappano was see-thru, you may be in for a new experience here.

END_OF_DOCUMENT_TOKEN_TO_BE_REPLACED

When Herod tells Salome that she can have whatever she wants if she will dance, we see the moment at which the ghastly idea occurs to her and she pounces on it: she is profoundly uninterested in Herod other than as a way to get her revenge on Jochanaan. The little orientalist flourish in the orchestra at the start of Salome’s dance (the bit with the drums and the little ‘middle eastern’ figures in the woodwinds) which seems to imply that what will follow will be a kind of seduction dance is both undercut and upheld by what follows.

END_OF_DOCUMENT_TOKEN_TO_BE_REPLACED

I remember reading recently that as far as we can make any historical sense at all out of the biblical story on which this opera is based, the real Salome was likely just a kid whose dancing was less a strip tease than a cute little caper. Part of me likes this possibility because it’d be sort of satisfying to know that the ‘dangerous Jezebel’ aspect of the story was read into it by later commentators who succeeded in finding in it what they wanted to. But neither the capering child nor the zealous commenters would make much of an opera. (Well, maybe the zealous commentators. But it’d be a very different opera.)